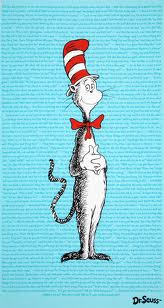 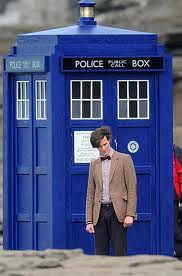 Bow ties are cool. I think the Cat in the Hat and the eleventh Doctor would agree on that. The eleventh doctor, you ask? I’m talking about the character on the BBC television show  Doctor Who. Until recently, I didn’t know much about him except that a few family members watched and had long, private discussions about him.

Doctor Who, you see, time travels. He travels through space and time, seeking out new adventures. Since my book is about that very subject, time travel, I thought I should investigate. After watching a few episodes, I felt the show was not for me. It was a little bit goofy, a little bit strange and a lot of very fast talking. A funny thing happened though. After being away from it, I wanted to know what was going on in the world of Doctor Who. I told my husband we had to finish the first season to see the Doctor regenerate if nothing else. That’s what he does, transforms into a new Doctor but he’s still the same person. I wanted to watch the new Doctor (David Tennant would now play the part of the tenth Doctor) and see how he embraced the role.

Then my son cancelled Netflix and that was the end of the Doctor…until we found him on the BBC America channel. We somehow got started watching Season Four right up to the current episode and now we’re hooked.

I’m going to tell you why I love Doctor Who. He’s very much like the great writer, Dr. Seuss, who I loved as a child and still do to this very day. They both can be silly and not make sense but in the end they tell a great story. Sometimes there’s even a lesson thrown in for good measure. They have a very unusual way with prose and can state the obvious in very interesting ways.

The Great Quote-Off
Dr. Seuss: You can find magic wherever you look. Sit back and relax, all you need is a book.
VS.
Doctor Who: You want weapons? We’re in a library! Books! The best weapons in the world!

Dr. Seuss: Don’t give up. I believe in you all. A person’s a person, no matter how small.
VS.
Doctor Who: You know in 900 years of time and space, I’ve never met anyone who wasn’t important.

Dr. Seuss: Oh the places you’ll go! There is fun to be done! There are points to be scored. There are games to be won. And the magical things you can do with that ball will make you the winning-est winner of all.
VS.
Doctor Who: Time isn’t a straight line. It’s all… bumpy-wumpy. There’s loads of boring stuff. Like Sundays and Tuesdays and Thursday afternoons. But now and then there are Saturdays.

Dr. Seuss: I box in yellow Gox box socks.
VS.
Doctor Who: It’s more like a big ball of wibbly-wobbly, timey-wimey…stuff.

Dr. Seuss: All those Nupboards in the Cupboards they’re good fun to have about. But that Nooth gush on my tooth brush…..Him I could do without.
VS.
Doctor Who: I’m the clever one. You’re the potato one. Now go away.

So there you have it, some really great quotes to help you through life.
What have we learned here today? Well, these two things…
Doctor Who: One blue box, some companions and he’s on his way.
Doctor Seuss: Many great books, a multitude of characters and he’s off and writing.
What’s not to like?

Unless someone like you cares a whole awful lot,
Nothing is going to get better. It’s not.
You’re off to Great Places!
Today is your day!
Your mountain is waiting,
So… get on your way!”

From Oh, the Places You’ll Go! by the great Dr. Seuss

Like Loading...
Books, Cat in the Hat, Doctor Who, Doctor Who Quotes, Dr. Seuss Quotes, Seuss
Previous
Next