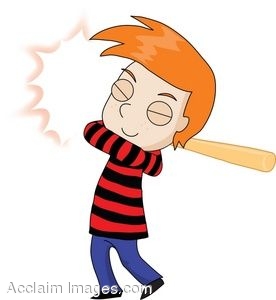 I just read an article in the sports page that has me fuming. It stated that scouts for baseball teams don’t usually like players with red hair. Really? I hoped it was a joke because the Cleveland Indians first draft choice is a player still in high school that has…wait for it, red hair. The punch line never came and I started to think this could be true. I decided to Google the topic and several stories came up on espn.go.com.

I should not really be surprised because when my son was little he had reddish-brown hair and people commented on it. It was never bright red or orange, judge for yourself.

When he was in high school he told me in younger years, kids called him “Red” to tease him. I was surprised because my husband and I never knew it happened and he never confided in us.   Now, as an adult, it looks brown. Red highlights are still there.

It made me start to think how many other children were bullied or teased because they had red hair. It’s also associated with a fairer skin and freckles, so stereotypes abound. Not much I could do about it but was determined to have at least one character in every book I wrote have a shade of red hair.

There are many tones of red—auburn, dark red, copper, strawberry blonde, light ginger. Some even dye their hair to get that color. Why the fascination? Anything rare or different is unique. Many are striving for that in their daily lives. A quick hair color change may do the trick and let’s face it, it’s a striking color.

According to multiple sources, about 2% of the population has natural red hair, the rarest color in the world. Some areas tend to have more redheads, mainly Northern and Western Europe. People with red hair are thought to be British or Irish descent.

To get scientific, it takes two recessive genes to make a red-headed child. Each parent must carry the gene and then there’s still just a one-in-four chance of that happening. Hair can be lighter at birth, and darken with age.

Fiery tempers, carrot top and the red-headed stepchild, even calling someone a Ginger have been unflattering comments about this hair color. When we see someone with that color hair, we take a second look and that’s okay. But to judge or think someone is different, that is not.

Back to the baseball story…the writer commented that scouts, for some reason, are not crazy about red hair. That is unless the player is really good at baseball. This prospect is really good at baseball. He has the possibility of turning into a phenom one day. When he does, I hope it finally puts to rest the conversation that started during this baseball draft. Does red hair have anything to do with his talent? I don’t see why the two go hand in hand but have to shake my head over this strange development.

I, for one, will be cheering harder for the kid, no matter his decision. He has until July to sign with the team. He may not. He may choose college over the major leagues. Until then, I’m sure he’s going to be asked about his hair multiple times because after all, isn’t that what baseball is all about?